This recent New York Times article features an array of students who turned down job offers after graduation despite the current economic conditions.Â  While some may argue that this is a savvy move for students not yet tied down by families or mortgages, do the benefits of holding out for that “dream” job really outweigh the costs?

Not in this economy.Â  In the past, I have encouraged friends and former interns to turn down jobs that weren’t a good fit for them either personally or professionally.Â  With a healthy economy and jobs readily available, there was always a back-up plan.Â  If that “stretch” job didn’t come through, you could always take another temporary job to get by.Â  These days, however, recent graduates are competing with highly qualified workers affected by layoffs, bankruptcy and the like.Â  Without the safety net of these jobs, the future looks a lot scarier for unemployed graduates.

Furthermore, this article neglects to mention an important fact – the graduates who blithely turned their “starter” jobs often move back in with Mom and Dad.Â  With 401(k) accounts dwindling, pensions disappearing and layoffs looming, is it really fair for these students to count on their parents for support?

In the end, my advice for the students mentioned in this article is simple: just jump in.Â  Like UConn President Michael Hogan says in this article: Say yes.Â  Continue to say yes – to professional development, stretching beyond your comfort zone and learning to live on a budget.Â  Even if your job offer isn’t perfect or the pay is low, future employers will be much more impressed by the skills and tenacity you demonstrated in your new position than they will be by a year of “blank space” on your next resume.

It has been two months since Diana Parsons graduated from the University of Wisconsin with a liberal arts degree that cost about $100,000, and she has still not found a full-time job. She has returned to Milwaukee, where she is living with her parents and occasionally waiting tables at a restaurant owned by a friend of her mother. 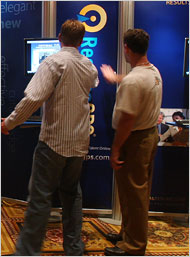 Ms. Parsons is far from the only member of the class of 2009 who is picky when it comes to employers. Job recruiters may be bypassing university campuses in droves and the unemployment rate may be at its highest point in decades, but college career advisers are noticing that many recent graduates do not seem to comprehend the challenging economic world they have just entered.

â€œI donâ€™t think the students understand, I really donâ€™t, but come September, October, when they still donâ€™t have jobs, theyâ€™re going to be panicky,â€ said Clarice Wilsey, a career counselor at the University of Oregon, where just 55 employers came to a recent job fair, down from nearly 90 the year before.